There were no excuses made for these men. Not one excuse was made to aid their salvation, mental health, finances, family life, love life, social or economic status, no negotiations, no warning signs, warning shots, no innocent until proven guilty. The intent was not to lend any excuses because lending excuses would at least acknowledge that one exists. No! The intent was sinister. In fact total annihilation. Rest in power to those!

When people say, they can’t complain, bothers me. To me the phrase implies a since of martyrdom. As if waking up to a world that directly traumatizes, devalues, mentally and emotionally diseases, fragments us should be satisfactory just because we survived another moment? I mean this most auspiciously, your silence will end your days as swiftly as they’ve started. I say, COMPLAIN! Don’t let a soul cover your mouth. COMPLAIN! To expand your value because your pain has a right to be here! COMPLAIN! For all of the voiceless. COMPLAIN! To build awareness. COMPLAIN! Because you can. Honestly, the most change ever eradicated in the world has been a result of those who complained. Imagine if Malcolm, Gandhi, or Kwame Ture didn’t complain-we would be even more whitewashed and afraid. Their complaints made us whole and aware of our wholeness. -Gracie Berry

Want black liberation at it’s beautifullest? Check out my girl BFly Denai @ http://www.blackshesus.com/ Black folks alive on this planet needs healing, lovin’, reflections of themselves in mirrors of them. 🙂

Girlrillavintage, Life Before the Boat is all about looking good for less! Lucky green glasses! My health insurance expires at the end of the month, so of course had to get me an exam and new pair. These babies were on the $500 rock. I thought there was no way in HELL they would be any cheaper, so being me I tried them on, fell in love, then asked the price-cringing lol! To my surprise they were $160 w/ 50% off plus an additional 40%. 48 BONES! Something about green! 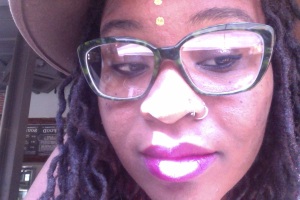 Thrift find: At first glance I was disturbed by it, then shocked. I realized that I needed to get a grip, literally get my hands on it before that old white lady did, so I slid in to stake my claim. Her face was irritated like I had stolen something from her. She huffed and puffed and stomped away. I examined the image and how it showed the glutenous way businesses have deployed racism to sell their products. Aah yes- Life After the Boat! They used our faces as they used our bodies to not only turn a profit, but to deplete us from ever existing as valuable human spirits on this planet. I approached the counter and the cashier said, “Wow! I’m surprised a person of color wants this.” In sarcasm I said, “Of course I wouldn’t want an image of a person that reflects me.” She apologized and talked some bullshit about how she lived during the 1960’s where stuff like this was really bad. I replied, “Um, Ferguson Missouri-stuff is still really bad.” I told her that she should never charge people of color that wants images like this. She charged me 50 cents from the $10 the store wanted for it. I told her that it’s part of my life’s mission to liberate my experience as well as those around me, and that this was not a purchase for monetary gain-it is a way to honor my ancestors, objectified like the one in this image. A way to honor them in my home and my heart, so that anyone who enters my space will bare witness to them-valued human spirit. They have a place here. It’s easier to whitewash over our history and pretend it never happened. People of color need to take symbols and images that are meant to oppress us and redefine them. It was like her sweet face was waiting to be found by me-someone that understands her, loves her. They can’t hold you hostage if you’re free. Remember life before the boat and how we honored each other and loved each other? Honor the richness from where we’ve come. Images like this are necessary parts of our healing. In solidarity to us still suffered by racism. Gracie Berry #digtheskinyouin #blacklovebeforetheboathelpsmeremeberblacklifebeforetheboat #weareone

Had a dental exam today for a bothersome tooth. The dentist took x-rays then after looking at them says, root canal. I’m like huh?! He then projects them onto a screen and of course I ask them to show me where the damage is. He talks in circles anf finally says, well, I really don’t see much. I’m going off of the symptoms you’re having.” Huh? You won’t be getting my $1,040 and healthy tooth pal. No way! I’ll take my prescription to go please. Oh yea then he comments about the art on my face-something about it being “in” right now and that his wife does it. I said, sir my family and culture inspires this art. It’s always “in” where I come from. Ugh ‪#‎whataripoff‬ ‪#‎dontbelievethehype‬ ‪#‎capitalismandhealtcaresucks‬

I’m in a time of major transition right now. I am my biggest advocate and no one can do work meant for me accept me. Saw my spirit dying by staying in a circumstance I had outgrown. And the miracle is is that I’m unafraid. Playful. I’m not worried. I smile and laugh. I know that things will be fine. Remembering what I came to this planet to do and that is to give the gifts of unconditional love and soul freedom. My current spiritual practice and physical health need grounded. Long over do they say, yet it’s right on time to me. Shout out! To all of my spirit guides, loved ones, friends for supporting me through this time of major change. Transformation starts at the molecular level. 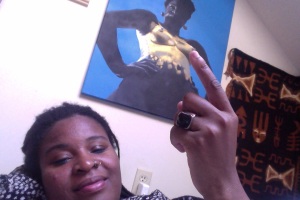 My brother and me! 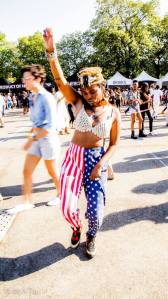 Bay area, here I come! I quit my job today! Feels so liberating to remove the rusted, catatonic chains that have held me hostage over the past 6 months. It’s time. My time is right now. Live! And don’t never be afraid to! Sipping on Absolute Mandarin Vodka and Tonic, like Ray Manlove from Hu-MAN UP style lol! In my home. Roomies adorning the space with Hallows eve allure. I’m at peace. Two weeks to go. The creative sees me and knows me well. I’m in good hands. Cheers to you!

It’s been my experience that whenever a question is posed about feminism the intention is self motivated-it is never truly to understand what feminism is because most times the person posing the question already has their minds made up in opposition. Frankly, feminism does not have to benefit men to be valid. If women are human beings, then fighting for women to be treated fairly and with dignity is enough.