Had dinner at Stubby’s Bar and Grill. Saw a Facebook friend, the only normal part of the evening. Delicious fries and burger after 18-years, (insert meme) lol! Guy sits next to me, tells me his painful life story-shorts stained from blood after coming from his day job of slaughtering deer and curing meat for cash. Filling my ear with things like me being so exotic and that there was no way I could be from the area the way I dressed. He purchased drinks that I let sit the entire night. He shared a story about an encounter he had with a homeless white guy in New Orleans that accused him of being cheap and not taking care of his own. The homeless guy went on to compare him to the black people that took better care of him than people like him. The white homeless person apparently used the N-word to describe those ‘caring’ black people, that took care of him. The deer guy eluded to using the N-word by saying, “Well I’m going to say what he said, but I don’t want you to get mad. I couldn’t believe that guy calling me-you know he said, the forbidden word whites called blacks back then? The bad N-word”. I don’t want to say it,  but.” I stopped him before nigger came dripping from his mouth, and told hime that I didn’t want to hear the N-word come from his mouth and in fact I had no interest in hearing any utterance of it at all. He diverted to some other non-race related conversation. And yelled, “I love you!” to me when I left the bar that night.

The bar tender over hears me say, “I prefer women”, after the deer guys tries flirting with me, and says a ridiculous comment about how ‘he’ is a lesbian too (barf). Then another “good ole boy” wearing a “Race Against Racism” T-shirt says, “You know how all you black people look alike (laughing his ass off)?” I said sir, “No sir, I don’t know how we all look alike. We are a culture, not a cult-and I don’t find anything you said funny.” The man next to us laughed and pointed fun at him for saying such a thing, called him a racist dumb ass. Good ole boy exclaimed, “I meant it to be funny-a joke you know!?” I said, No, I don’t understand how you meant it to be a joke. And the only joke seems to be on you sir. You should never wear that T-shirt again, ever-in public, or say those words to any person of color you meet, ever.” His face seemed to resemble that which encounters a pile of shit in close proximity. Strange and eventful night-all for craving a burger. Lawd of mercy!

Pic #1 Burger was so good. #2 The well lit football helmet? #3 The moment deer meat dude walked up on me, stumblin’. #4 Me cool and collected-wishin’ a mufuka would lol! ‪#‎Liberatingmyexperienceatallwhiteplaces‬ 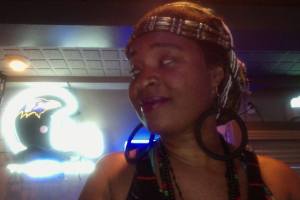